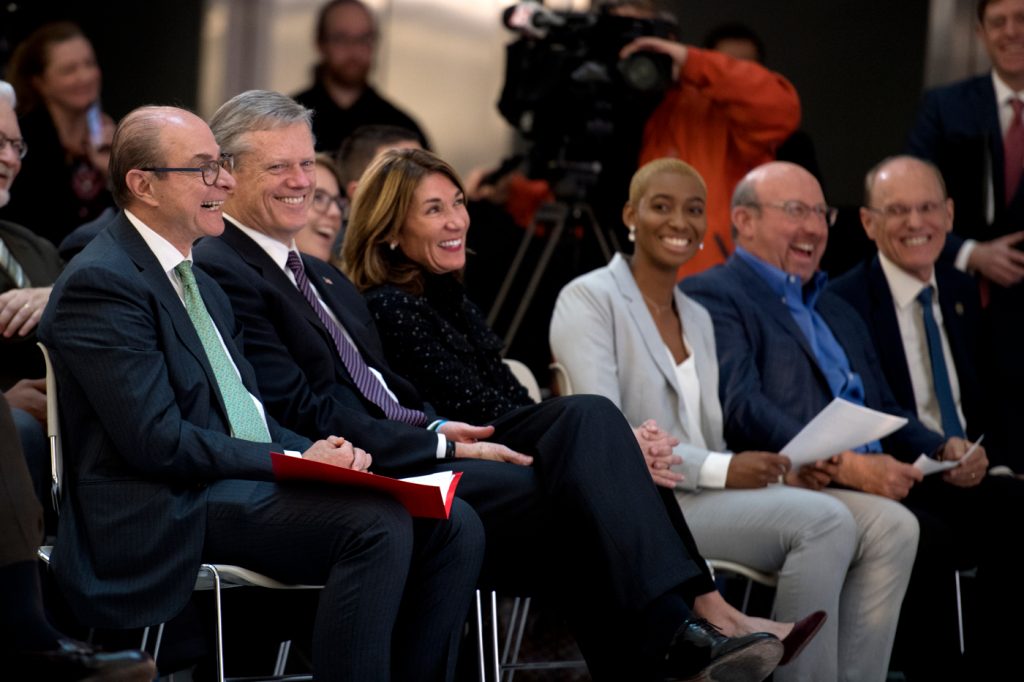 As our society becomes more digital and connected, the disciplines of science, technology, engineering, and math will become increasingly intertwined with every aspect of work.

This was the message embraced Tuesday by Massachusetts Gov. Charlie Baker, Northeastern President Joseph E. Aoun, and other educators, government officials, and business leaders who hailed a new $4.4 million grant from the National Science Foundation for scholarships that support low-income and underrepresented minority students in an accelerated pathway program to entering the STEM workforce.

The program, which was developed by Northeastern and Middlesex Community College, offers students a fast track to earning associate, bachelor’s, and master’s degrees in biotechnology and preparing for careers in life sciences.

“The biggest and most important thing people need to understand about STEM is the universe that’s associated with how it can be applied, when it can be applied, and who can apply it is just going to get bigger and broader over time,” Baker said at a ceremony in the atrium of Northeastern’s Interdisciplinary Science and Engineering Complex. “And there’s no place in the country where it’s going to be more important for us to be good at this than here in Massachusetts.”

Addressing an audience seated at the base of six glass and steel floors of classrooms and research labs, Aoun said it is critical that students’ STEM education also introduce components that incorporate the “human factor,” which he described as the ability to be creative, innovative, entrepreneurial, and culturally agile.

“This is what we call here at Northeastern the humanics approach to STEM,” Aoun said, “and this is why I am so excited with this program. This program is not going to teach STEM in isolation.”

The Biotech Associate to Master’s program provides another example of Northeastern’s approach to learning: making college accessible and inclusive for low-income and underrepresented minority students, developing flexible academic programs that meet students’ needs and allow them to be lifelong learners, and broadening opportunities for students to pursue degrees and careers in the fields of science, technology, engineering and math.

Northeastern’s ALIGN program, which offers a master’s degree in computer science for non-computer science majors, helps lifelong learners expand their skill sets and make information technology and computer science careers accessible to diverse populations of learners, including women and underrepresented minorities. Last month, the university also announced a partnership with Google in which people who complete Google’s IT Support Professional Certificate can now receive credit toward a bachelor’s degree in information technology.

Tuesday’s ceremony was part of state’s inaugural STEM Week, which is focused on increasing students’ interest in education and careers in the fields of science, technology, engineering, and mathematics.

“It’s a huge opportunity for us to highlight and showcase and spotlight all the incredible things that are happening in classrooms, in communities, in colleges, and universities across our commonwealth to create a more robust pipeline of talent to fuel the industries that are growing across multiple sectors,” said Massachusetts Lt. Gov. Karyn Polito, who co-chairs the state’s STEM Advisory Council along with U.S. Rep. Joseph Kennedy III and Jeffrey Leiden, the  chairman, president, and chief operating officer of Vertex Pharmaceuticals.

Over the next five years, the National Science Foundation grant will fund approximately 530 scholarships of up to $10,000 per year per student in the Biotech Associate to Master’s program. The scholarships, when combined with federal financial aid and other assistance, will completely cover or significantly reduce students’ out-of-pocket tuition costs.

Supporting low-income and underrepresented minorities is a critical focus for industry, government, and higher education institutions as they work together to increase the number of students in the fields of science, technology, engineering, and math. There is a no less critical need, Kennedy said, to increase diversity in the STEM workforce and provide more opportunities for underrepresented students to learn about opportunities in these fields. According to the U.S. Department of Commerce, women represented 47 percent of the country’s total workforce in 2015, but held only 24 percent of jobs in the STEM fields.

“That’s what today is all about,” Kennedy said. “To try to expand that opportunity, to make those investments, to challenge our government at every single level including obviously the federal, to make sure that we make the investments so that every child can recognize and realize their potential.”

The Biotech Associate to Master’s program will also prepare students for the region’s biotechnology job market by providing them with research experiences, paid internships, mentorship, and academic and career advising. Northeastern and Middlesex Community College have formed partnerships with biotech companies and organizations to provide scholarship recipients with these resources and help tailor the program to the specific workforce needs in the biotech industry. These organizations include Vertex Pharmaceuticals, Pfizer, Novartis, Shire, the Massachusetts Biotechnology Education Foundation, and the Massachusetts Life Sciences Center.

“There is a significant value in mentorship, particularly for minority students interested in STEM,” said Bria Hernandez, a fifth-year biochemistry student who was the master of ceremonies of the event. “Many of us are coming from underprivileged and underexposed backgrounds. These scholarships, grants, and funding are crucial to all these diverse talents in STEM.”

Massachusetts’ life sciences industry is expected to add nearly 12,000 more new jobs by May 2023, according to a report released earlier this year by the Massachusetts Biotechnology Education Foundation. Leiden, who leads Vertex, said Boston’s biotech industry is booming, but faces a shortage of young people to fill current and future jobs.

“We’re competing globally for this talent,” Leiden said. “It’s up to us to make sure that we can compete by training that next generation of young people who will be future leaders in this industry.”

Leiden added that the industry internships and mentorship offered through the biotech pathway program could be “life-changing experiences” for the students who receive them.

Middlesex Community College President James C. Mabry added: “These very capable and ambitious students will have the opportunity to turn their big dreams into reality.”

Through the Biotech Associate to Master’s program, students earn an associate degree in the Middlesex Community College Biotechnology Technician program. Next, they can transfer their college credit and matriculate into the bachelor’s completion program in biotechnology in the College of Professional Studies at Northeastern. Then, while still in their undergraduate program, students can apply to the “PlusOne” biotechnology master’s program, in which they can take four graduate-level courses in the College of Science at undergraduate tuition rates.

Full-time students in good academic standing who are eligible for federal Pell Grants, and who are U.S. citizens, legal permanent residents, or have been granted refugee status in the United States can apply for the scholarships. Though the accelerated pathway program is designed for students to earn all three degrees, students can apply for scholarships at any point while enrolled in one of the three degree programs.

← Samuel Altschuler, MBA'58, Looks Back on 60 Years as a Husky Alumnus What Can You Learn from Uneven Bars, a Magazine, and a Good Pair of Shoes? →