THIS ENTREPRENEURIAL AWARD CAME FROM THE HEART

This Entrepreneurial Award Came from the Heart 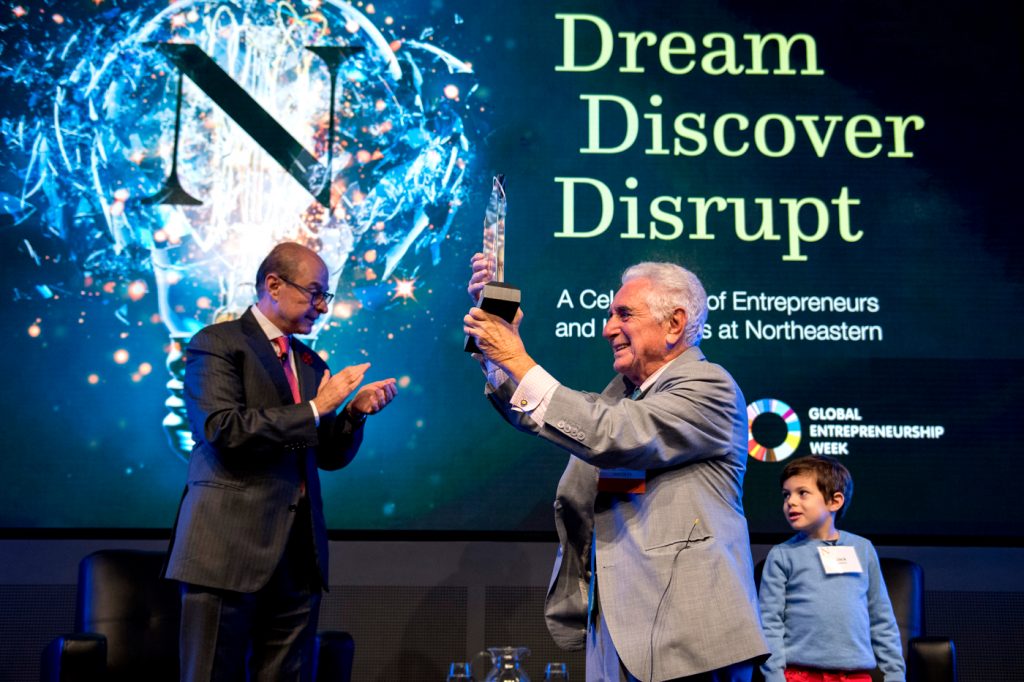 Thermo Electron, a Boston-based company run by two brothers from Greece, invested 20 years in research and development before its landmark invention of an artificial heart in the 1980s. But no investor was willing to back the risky new technology. As a result, a majority of Thermo’s board members voted to abandon the project. They were held off by two brothers, George and John Hatsopoulos.

“I said, ‘I’m going to raise the money,’” recalled John Hatsopoulos. “Everybody thought I was crazy.”

Such was the operating principle of a company known internationally for recognizing public concerns and responding with a wide variety of high-tech inventions.

That story is why Northeastern alumnus John N. Hatsopoulos was honored as the recipient of the university’s Distinguished Entrepreneur Award on Tuesday night, as part of Northeastern’s celebration of Global Entrepreneurship Week.

The award was launched last year by President Joseph E. Aoun to recognize the university’s commitment to entrepreneurship. While technology offers promise of economic growth, Aoun noted that the human dynamic remains indispensable.

“At Northeastern, entrepreneurship is something that we believe is essential,” said Aoun, who began the evening by noting that Hatsopoulos, a financial wizard, had graduated in 1959 with a degree in history and a minor in math.

“We all know that machines are getting smarter. People are wondering, how am I going to flourish in a new environment where [artificial intelligence] is dominating the world? This is where we really have to focus on our human attributes, on what we can do that machines do not do. One thing is the ability to be innovative, to be entrepreneurial, to be creative. And that’s what we are celebrating. This entrepreneurship week is the celebration of the human edge over machines.”

Hatsopoulos, who also received an honorary degree from Northeastern in 1999, has been a strong backer of the university and its entrepreneurial programs. He is a regular supporter of the Entrepreneurship and Innovation Fund of the D’Amore-McKim School of Business, which promotes entrepreneurial co-op opportunities. He has also established an endowed scholarship at the Barnett Institute for Chemical and Biological Analysis.

Hatsopoulos reflected upon his unlikely career during a fireside chat with Aoun in the auditorium of the Interdisciplinary Science and Engineering Complex.

As a teenager in Athens, Hatsopoulos was a semi-pro soccer player from a prominent Greek family. His father, Nicholas, was chief operating officer of the Greek subway system. His grandfathers were both members of the Greek Parliament, and his uncle was on the board of the National Technical University, which is Greece’s answer to MIT. And yet, Hatsopoulos found himself moving to the United States, reluctantly, to attend Northeastern at the insistence of his mother.

He arrived while George, his older brother, was developing plans to launch Thermo Electron Corporation (now Thermo Fisher Scientific, a Fortune 500 company) out of a garage. In a meteoric rise over the ensuing decade, the company would meet the demand for human solutions to technical problems by inventing car emission gauges, bomb detectors, mammography machines, and the artificial heart.

“My first job was to do [financial] calculations, and also to shovel snow from inside the building,” John Hatsopoulos said. “Our first building was under a body shop, and the snow would come in. Before my brother would come to work, I had to go in and shovel the snow so he could go to his desk.”

On Tuesday, John Hatsopoulos accepted the award while grieving for his brother, who died in September at age 91. During the Nazi occupation of Athens during World War II, George Hatsopoulos had built radios from used parts in order to provide the Greek resistance with access to BBC newscasts. He had enrolled at MIT a decade before John followed him to Boston.

George was the legendary scientist who responded to public needs with breakthrough solutions. John was the money man. Over the years, he would develop a variety of financial strategies for the company, leading to a 2006 merger with Fisher Scientific, as well as a spinout strategy that created 24 public companies and $5 billion in capital for Thermo and its subsidiaries.

His signature decision, three decades ago, was to procure funding for the artificial heart by guaranteeing the investment. Lehman Brothers and other investors wanted nothing to do with the project after the fiasco of the Jarvik-7 artificial heart, produced by a rival company, which had turned out to endanger its recipients.

Thermo never had to provide a refund.

“To this day, it is the only FDA-approved artificial heart,” Hatsopoulos said. “And it wasn’t supposed to happen.”

John Hatsopoulos rose to become president at Thermo. Among many other corporate responsibilities, he has held leadership positions with clean-energy firms American DG Energy and Tecogen.

“I would like to recommend to all of you to find a brother like I had,” Hatsopoulos said, who recalled a conversation not so long ago with investor Peter Lynch. “He said, ‘always invest in something that everybody understands.’ Well, George invested in something that nobody understood. Nobody understood what thermodynamics is. He created a company with [an initial investment of] $50,000. Today [it has] 70,000 employees, [more than $20 billion in revenues], and we continue to grow.”

Tuesday’s award ceremony was the keynote event for Global Entrepreneurship Week at Northeastern.

On Wednesday, Northeastern’s Entrepreneurs Club will be holding Demo Day at the Curry Student Center Ballroom. An opening field of more than 130 students representing more than  60 startup teams has been narrowed down to the top 10 teams, which will be competing for the opportunity to win $5,000 in cash prizes.

Northeastern’s networking event, NEXPO, will be held Thursday at the Interdisciplinary Science and Engineering Complex. And on Friday, the Mosaic Reunion Keynote and Reception will be bring together the builders and leaders of Northeastern’s entrepreneurship ecosystem.

← What Can You Learn from Uneven Bars, a Magazine, and a Good Pair of Shoes? Northeastern Establishes the Khoury College of Computer Sciences →