On what makes Northeastern University an important part of his life: “I never attended Northeastern, but I hired a lot of Northeastern engineers. And they were very good, in the sense that I think the most important thing about an employee is his attitude. If they have a good attitude, you can always find a place for them.”

On his involvement with the Barnett Institute: “And again, it was just such a practical thing. A university with an institute dedicated to analytical chemistry. There wasn’t anyplace else in the world that had that. Northeastern has done the practical kinds of things. Good for the ordinary person.”

On the changes he has witnessed at Northeastern University: “It was just a very practical, working person’s university. Growing out of the YMCA and it has just changed so much since then. I think the big thing is—you did a very good job with entrepreneurial students, students who are going to be entrepreneurs, and engineers.” 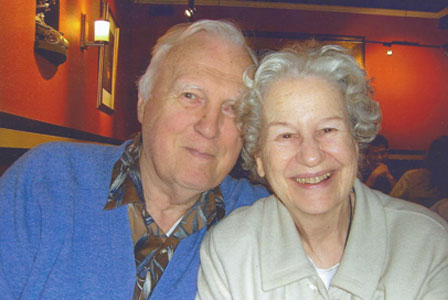 Jim with his wife, Faith.

On the changes to the Northeastern campus: “The minus is it would be very easy to lose the things that are so good about Northeastern and become just like every other university. The good thing is, if you can keep your culture you will be appealing to a larger group of students.”

On how Northeastern has made a positive impact on society: “There were a lot of people who were bright enough, who’s families could never afford to send them to a university full time. But they could live at home. They could come to night school.”

On the James L. Waters Chair in Analytical Chemistry: “It just seemed like a grant to Northeastern was worthwhile. They said—Oh, well, why don’t we create a chair for you. So I said okay.”

On the role of university trustees: “A trustee’s role at a university is probably more of a guardian role. In other words, if for some reason the university is going to be impractical or just go way off, the trustees are likely to try to bring them back.”

On changes he had an impact on as a trustee: “So, I could be, it wasn’t even a cheerleader, it was just a solid supporter of, remember Northeastern is different, let’s not try to be like other universities. Let’s make sure we keep our message and let’s be good at it.” 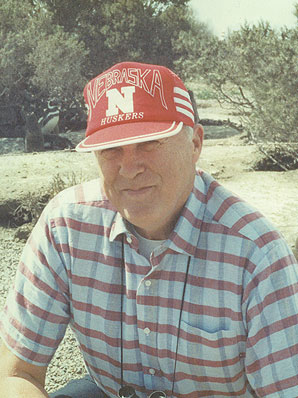 Jim, who grew up in Nebraska, sits outside wearing a University of Nebraska-Lincoln Huskers hat.

On the role Northeastern has played in his life: “It’s been a nice experience. I enjoy the people. They are good people. It’s just a joy.”

On what makes him proud to be involved with Northeastern: “I think I’ve delivered a few benefits. And it’s always nice when your…the older you get, the nicer it is to look back and say—I delivered some benefits. I made a difference.”

This interview is available in its entirety in the Northeastern University Archives. Photos: Jim Waters and University Advancement Office. 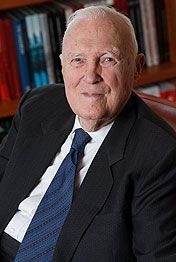 Jim Waters is an entrepreneur and industry pioneer who received an honorary degree from Northeastern in 1993. He is the founder of Waters Corporation, an instrument company that started as a research boutique building instruments to specification and grew into a billion dollar business serving scientists all over the world.

Jim was raised in Nebraska until his family moved to Framingham, Massachusetts in 1942. In 1947, he received a bachelor’s degree from Columbia University in physics and engineering. He served as an officer in the U.S. Navy during World War II. In 1959, he founded Waters Associates, the pre-cursor to Waters Corporation, with its first shop located in the basement of the police station in Framingham. Waters Corporation merged with Millipore in 1980. In 1996 Jim founded Cetek Corporation, a biotechnology research firm. He served as the chairman of the board until selling the company’s assets in 2007. With his wife, Faith Pigors Waters (MEd’72), he is the cofounder and trustee of the Waters Foundation, a private charitable foundation focused on systems thinking in the field of K-12 education, a passion of Jim’s.

Because of their strong belief in the value of higher education, Jim and Faith have been generous supporters of Northeastern for decades. They endowed the James L. Waters Chair in Analytical Chemistry and have provided numerous gifts to the Barnett Institute, including funding the James L. Waters Mass Spectrometry Laboratory and The James and Faith Waters 500 MHz NMR Facility. A gift from Jim and Faith established the Waters Research Electrophoresis Fund.

Jim is member of the Biotechnology Steering Committee, a benefactor of the Huntington Society, and a longtime member of the Barnett Institute Advisory Board. He serves as a Lifetime Trustee Emeritus.

Jim and Faith live in Concord, Massachusetts and have two children.