WHAT CAN YOU LEARN FROM UNEVEN BARS, A MAGAZINE, AND A GOOD PAIR OF SHOES?

What Can You Learn from Uneven Bars, a Magazine, and a Good Pair of Shoes? 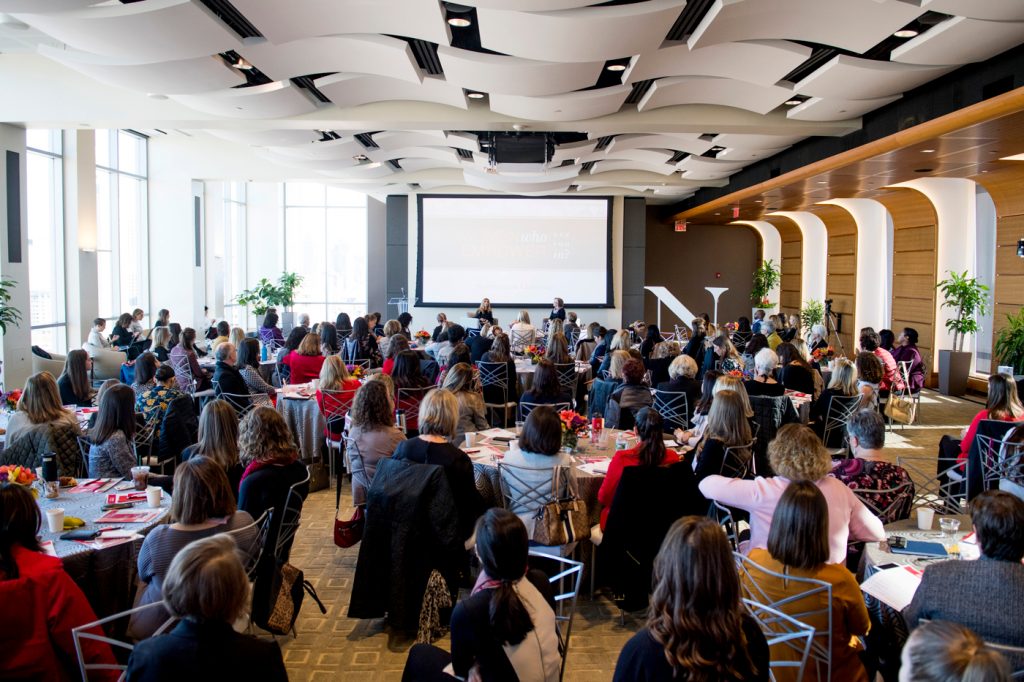 Peer into any discipline and these tenets hold true. An entrepreneur will tell you that the key to keeping an artisan shoe company like M.Gemi relevant in the 21st century is online distribution and real-time data monitoring. An Olympic gymnast will tell you success is about more than just one sport. An editorial giant will say that what made Elle so successful was blending past experience to create a magazine that’s well rounded.

They spoke at the third annual Women who Empower summit at Northeastern on Wednesday, which represented a sort of brain trust of women who lead in their respective fields. Business owner Cheryl Kaplan, Olympic gymnast Nastia Liukin, and editor Robbie Myers shared stories of how they got to be titans of their fields to a crowd of more than 250 entrepreneurs, students, faculty, and staff—the vast majority of whom were women.

Though running an international business, winning Olympic gold, and steering one of the world’s most storied magazines seem to have little in common, at the core of each speaker’s story was a determination to keep learning, to keep reinventing.

“This is a roomful of people who believe there are different paths to prosperity,” said Diane MacGillivray, one of the event organizers and Northeastern’s senior vice president for university advancement. “Ninety years after Virginia Woolf reminded us, we still need a room of our own. This is our room,” MacGillivray said, echoing the author’s essay by the same name.

The summit began three years ago as the Women who Inspire conference, and has since grown to become a “core priority for the university,” said Northeastern President Joseph E. Aoun.

“What’s happened here for us is that Women who Empower is a strategic priority,” he said. “Here at Northeastern, we are empowering people to be innovative and entrepreneurial.”

Henry Nasella, chairman emeritus of Northeastern’s Board of Trustees, said that creating a “pipeline of talent” through mentorship is a priority for university leadership, too.

The importance of the summit stretches beyond the four walls of the 17th floor of East Village, where the event was held, said Philomena Mantella, another event organizer and senior vice president and chief executive officer of Northeastern’s Lifelong Learning Network.

“I think this Women who Empower network has the makings of being a broader movement,” she said. “We can learn together how to move on the things that are important in our lives and in our world.”

‘Life isn’t about winning, it’s about finding something you’re passionate about’

What’s it like to achieve your biggest dream as a teenager?

“Scary,” said Liukin, an Olympic gymnast who, at 18 years old, won gold in the 2008 Games. “I just remember being so afraid because I’m standing there on the podium, thinking, ‘This is something I’ve dreamed about, this is my lifelong dream, and I’ve just achieved it. What will I do for the rest of my life?’”

Since 2008, Liukin has parlayed her athletic success and status as a role model for young gymnasts into a job as an NBC sports analyst, a lifestyle blog, and, most recently, as the co-founder of Grander, a social media-style app that enables aspiring female gymnasts to connect with pros for advice and encouragement.

The prospect of being something other than a gymnast was daunting at first, Liukin said, because it had been such a big part of to her identity for so long. She described one moment in particular in which she was forced to confront this uncomfortable reality.

It was 2012, and Liukin was competing for a space on the U.S. Olympic team. She slipped on the uneven bars and landed face-down on the mat, her shot at another Olympic Games shattered.

“I remembered my father always telling me to finish what you start,” Liukin said. “So, at that point, knowing none of it mattered and I had 30 seconds to get back on the bar, I stood up and finished my routine. And for the very first time in my life and career I had a standing ovation. For the worst routine of my life.”

It was a defining moment of her life, Liukin said.

“That’s when I realized life isn’t about winning; it’s truly about finding something you love to do, something you’re passionate about, and doing it.”

‘Why wouldn’t there be journalism in a magazine for women?’

Robbie Myers’s first job out of college was at Rolling Stone in the 1980s, when it was “very much the counterculture magazine of the time,” she said.

Her next job was at Interview magazine, which was co-founded by the artist Andy Warhol. It was a transition that took some getting used to.

“I ran out of Rolling Stone with all this journalistic fire and went to Interviewwhere it was very much about image,” Myers said. “I remember thinking ‘OK, this is an important lesson to learn: Not every magazine has the same mission.’”

Myers, who was the editor-in-chief of Elle magazine for 17 years, is roughly a week into her new job at the helm of Shondaland.com, the media company created by Shonda Rhimes, the creator of Grey’s Anatomy, Scandal, and How to Get Away With Murder.

She brought her diverse experience to Elle, shaping the magazine to be serious about fashion and politics.

“Why wouldn’t there be journalism in a magazine for women?” she asked. “Ellestarted in France in 1945, and its mission was to open women’s appetites. Elle in the United States was a game-changing magazine.”

‘Figuring out what to do and how to do it’

A key tenant of the M.Gemi shoe company, said Kaplan, its president and co-founder, is its nimbleness. The company imports luxury shoes directly from small family-owned workshops in Italy and sells them online, dropping new styles each week.

The weekly design process allows the company to learn quickly what’s working and what’s not.

“We’re not designing shoes for the whole season; right now we’re designing shoes for December and January,” Kaplan said. “That means when we drop a shoe on Monday we get real data on what women like and don’t like in a matter of days. We can be that responsive.”

← Northeastern, Industry, and Government Leaders Hail New Grant That Will Help Increase Diversity in STEM This Entrepreneurial Award Came from the Heart →