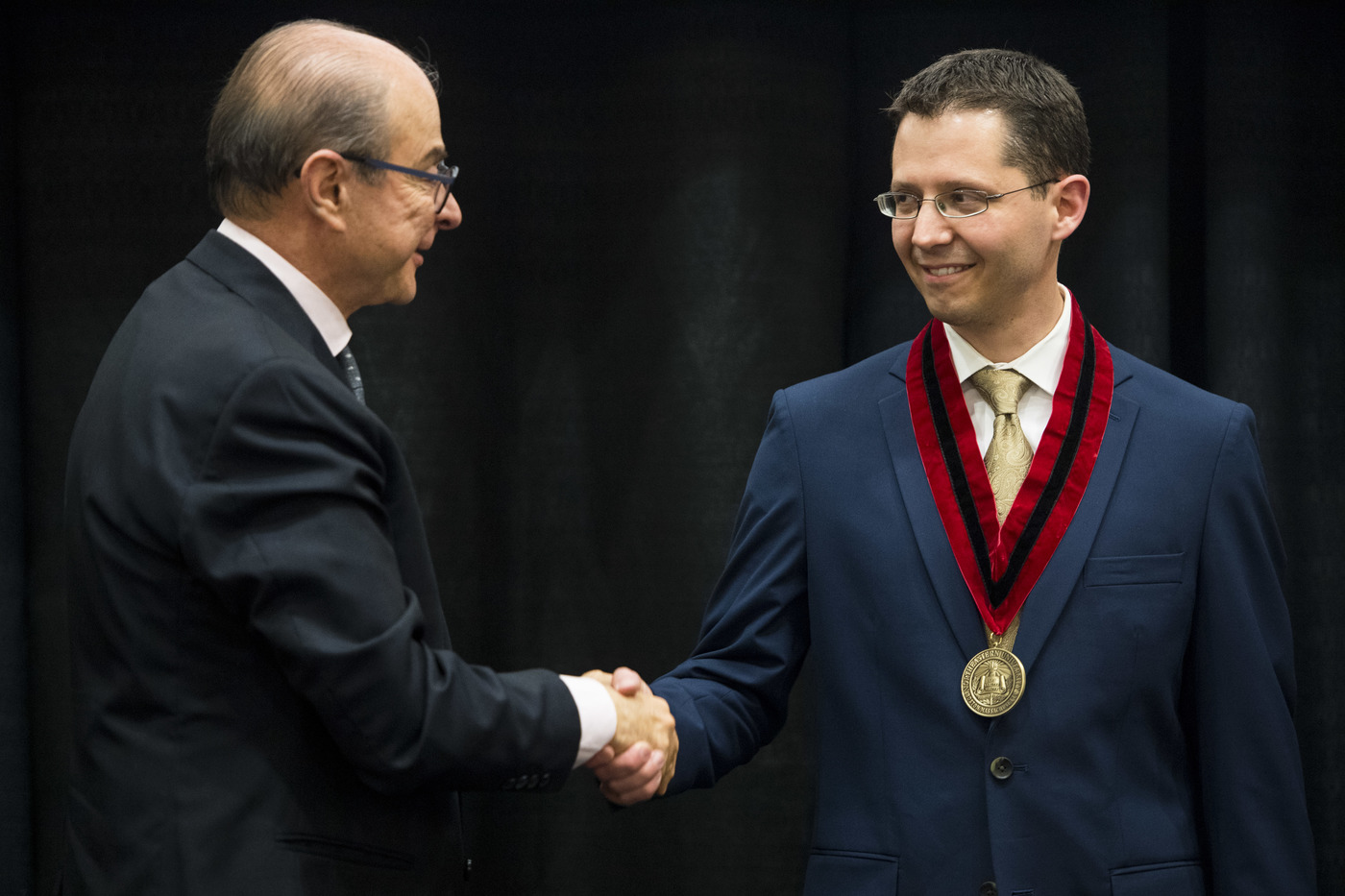 Associate professor of philosophy Rory Smead delivered an engaging lecture Thursday night on his work at the intersection of philosophy and science, at an event where he was formally installed as the inaugural Ronald L. and Linda A. Rossetti Professor for the Humanities.

In this endowed position—supported by alumnus Ronald and Linda Rossetti—Smead is leading a new program dedicated to this precise type of interdisciplinary thinking. The program’s focus is to inspire students majoring in science, engineering, and business to explore and discover new interests within the liberal arts—and weave together the humanities and non-humanities as part of their Northeastern education. At center, Ronald Rossetti, DMSB’66, H’06, and his wife Linda, made a gift to support the inaugural Ronald L. and Linda A. Rossetti Professor for the Humanities and establish the the Rossetti Family Program for the Advancement of the Humanities. Photo by Adam Glanzman/Northeastern University

“Philosophy has something to offer science beyond ethical guidance, critiques, reflections, and how it relates to the human condition—and science may have something to offer philosophy, as well,” Smead said in his lecture, held in Raytheon Amphitheater.

Smead’s current research is focused on the evolution of spite, costly behavior that harms others, as well as the connections between learning, evolution and social behavior, especially with regard to ethical behaviors and cooperation. His work often leads him to ponder situations that beg the question, “Why are we doing this?” As an example, he said traffic and driving seem particularly suited to bring out our nasty side, recalling a time he witnessed two cars merge into each other on Interstate 93 because neither driver would allow the other to merge ahead.

In studying these philosophical questions and topics, Smead acknowledged the valuable contributions scientists—particularly biologists, whose work he finds particularly fascinating—can bring to the fold. On one hand, he said, there are striking examples of cooperation in nature, such as altruistic food sharing among vampire bats and bacteria that sacrifice themselves for the benefit of the larger group. On the other, biologists have shown how bacteria and red fire ants, for example, sometimes kill off some of their own.

Rory Smead Ronald L. and Linda A. Rossetti Professor for the Humanities

President Joseph E. Aoun noted that Smead embodies Ronald Rossetti’s vision. “Frankly in some ways he’s going beyond it,” Aoun said of Smead, “because he says the boundaries between any field and philosophy by definition do not exist.”

Ronald Rossetti, DMSB’66, H’06, is a business school alumnus and trustee emeritus. The endowed chair position is the latest example of Rossetti’s longstanding commitment to supporting Northeastern’s mission. He was elected to the Northeastern University Corporation in 1980, was elected to the Board of Overseers in 1992, and elevated to the Board of Trustees in 1994. He has also been a longtime supporter of the Northeastern Annual Fund and served as chair of the Leadership Capital Campaign that began in 1998. He was elected as trustee emeritus in 2016.

“I owe a true debt of gratitude to Northeastern University, and the Rossetti Professor for the Humanities is a small way to repay that,” Rossetti said. “It also allows me to advance one of my great passions: challenging students to question preconceived beliefs, consider multiple sides of today’s issues, think critically, and challenge the world around them.”

In addition to the endowed professorship, the Rossettis’ gift establishes the Rossetti Family Program for the Advancement of the Humanities, which Smead is directing. It aims to promote engaged global citizens and leaders by uniting scholarship and experiential learning for students outside the humanities. The program includes supporting co-ops, study abroad and Dialogue of Civilizations programs, and other experiential learning opportunities for students. A research group has also been launched to provide students from all disciplines the opportunity to work closely with faculty in studying topics within the humanities and social sciences. Rory Smead, director of the Rossetti Family Program for the Advancement of the Humanities, delivers remarks Thursday night Photo by Adam Glanzman/Northeastern University

Uta Poiger, dean of the College of Social Sciences and Humanities, introduced Smead at the ceremony and noted how his scholarship and teaching make him particularly well-suited for this role.

Smead later offered examples from his courses in which a biology student applied methods of taxonomy to understand historical relations between philosophical ideas, neuroscience majors wrote on the nature of human knowledge, and computer science students programed simulations to help them explore topics like collaboration.

“I’ve found that in the process of applying those tools to philosophical questions, students start to reflect critically on those tools and methods,” he said. “They start appreciating their scope and limits.” Through these experiences, he said, students develop a lasting interest in philosophy.

← At Home on Shifting Ground As the First College Graduates in Their Families, Torch Scholars Share Their Stories →
X